Learning by doing with simulation games is growing strongly in this centennial. Using life like simulations to train complex situations with high risks and big operational impact are used widely to train in the military, in space, government crisis handling, industrial equipment handling (airflight pilots, offshore personnel), business strategy, logistics and more recently in medical. The advancement in IT, virtual reality and gaming has made it possible to develop at relative low cost complex games. But are they really effective? In a 2010 meta study, summarizing the results of 65 studies, proves that factual knowledge is 11% higher for trainees taught with simulation games compared to people using traditional training methods; procedural knowledge is 14% higher; retention is 9% higher; and self-efficacy is 20% higher. (Ely and Sitzmann 2010 University of Colorado).

TBA has a long history of using serious games for training purposes, ranging from business games focused on maritime terminals to interactive, dynamic planning games to teach planners and operational controllers the finesses of optimized planning and execution.  Now, TBA is taking the simulation experience in training onto the next level in 2015, where TBA wants to offer their clients fully immersive training experiences in the 3D simulation game, which are as near to live as they can make them. This will improve the effectiveness of the training and the daily performance in automated terminals.

In 2015 several fully automated terminals will come into operation, especially designed to take on the challenge of high efficiency, low costs and high waterside productivity for 20.000 + TEU ships. As these megaships are driving (peak) productivity demands in the terminal waterside operation, expectations are that (semi-) automation will increase in the next years over different terminal operations worldwide. Fully automated terminals are putting different requirements to the staff controlling them, as the tasks become less operational and more tactical. When things run smoothly, there are no eyes outside to warn you in case something goes wrong. Meanwhile, the speed of operation is ramping up, productivity demands are over 40 bx/hr, and operational impact is to be minimized in case of disruptions. Though these are really exciting developments, it also challenges terminal management how to train their personnel to ensure safety procedures are followed rigidly with minimal impact on production and maximum safety for the people working outside in the automated areas.

Because when disruptions occur, for instance, due to equipment breakdown, people still need to go on-site in automated areas. To ensure maximum safety and maximum performance, everyone working on the terminal needs to have a deep understanding and risk awareness of the automated terminal operations and the consequences of decisions made from remote workspaces. The game TBA has developed allows the trainee to experience what it feels like in the automated areas and how important communication and safety is out there, but also the different possible solutions one can choose to solve disruptions. It also allows to test and train standard operating procedures under a wide range of possible operational scenarios, without exposing people to the real danger, and hence providing a safe yet powerful learning environment.

TBA has been working for years with state-of-the-art simulation models all around the globe for consultancy, operational excellence and training for terminals. To be prepared for the future demands of clients in 2011 TBA started to participate in a research consortium with the Delft University of Technology, Dinalog (Dutch Institute for Advanced Logistics), several SME companies and the two new automated terminals in the Port of Rotterdam, Rotterdam World Gateway and APMT MV2. The subject of the research is to create a higher shared situational awareness in the container supply chain, to reduce on site risks and therefore disruptions, which have a negative impact on supply chain operations, safety and productivity.

Shared situational awareness aims for a higher awareness of the risks which exist in an (semi-) automated terminal environment and improve overall productivity by reducing disruptions and disruption time. Especially interdependent risks, where multiple parties are involved, can be reduced through a better understanding of the implications of decisions and communication throughout the supply chain. This has led to the development of the SAFE-T GAME, which is taking training through simulation to the next level, by developing a complete virtual terminal in which people can also enter and move around as a game persona. The game can be used to train onsite personnel for day to day operations in fully and semi-automated terminals and to create more awareness among personnel about the impact of their decisions on others, on the operation and reducing on site risks.

Scenarios and feedback are built into the game with different levels, and can be rerun. Together with a trainer, softer skills can also be trained, such as effective communications, analysis of behaviour, different tactical decisions and impact on the operation. Integrated into the game is the actual TBA TEAMS equipment control software (runs live operation for automated QC’s, ASC’s and AGV’s), with which a number of automated terminals are currently operating, among which the participating terminals. A complete virtual terminal is running, based on TBA’s CONTROLS software, which is normally used for optimization and testing TOS software and thirdly a robust game engine, which supports immersive virtual reality and 3D:

The 3 components of the SAFE-T GAME

The SAFE-T GAME is the first virtual reality automated terminal game worldwide pioneered by TBA. As a game persona you can walk around in the virtual terminal, which has the exact layout and the exact behaviour as the live terminal outside. The game is tailor-made to the terminal to replicate the exact circumstances, such as safety and fence control procedures. Currently, you are either a dispatcher or a mechanic. TBA is currently testing with the research partners how to train several risk awareness subjects, such as situational understanding, safety procedures, how to handle disruptions to minimize impact on performance, how to handle equipment breakdown and communications effectiveness. Preliminairy tests have shown technical personnel to behave in the game as in real life and has exposed behaviour which poses a potential risk. In addition, effective communication from an operations room to outside personnel and vice versa is an important subject to ensure minimized risks for technical personnel.

Together with the two terminals, TBA is currently extending the SAFE-T game into a full training suite, to train dispatchers, mechanics and external personnel that occasionally need to work on site. TBA is implementing the use of the Oculus Rift virtual reality glasses, which will give the mechanic the most realistic experience in the virtual terminal, when he is fully immersed within the 3D terminal. Preliminary testing has been done with connecting the Terminal Operating System (TOS), where the operation in the virtual terminal will than replay the actual outside live operation, as planned and executed in the TOS.

TBA plans to further expand this in 2015, because this would allow personnel to recreate live disruptions and vary and evaluate their responses to see the impact on the performance in the TOS. Other extensions which are under evaluation, are the addition of more and different equipment maintenance scenarios, add disturbing factors such as sound, add additional roles or using the virtual terminal as a quick training tool on procedural behavior and safety risks in automated environments. Besides, it can also just be fun and educational; imagine putting on the VR glasses in the reception room and just walk anywhere on the terminal, seeing up close how the operation works, climb a QC or jump onto an AGV, whereas in real live very few people are allowed on site!

In the coming months, more training sessions will be conducted with the SAFE-T GAME, to test and fine tune the scenarios included in the game with operational and safety experts, as well as educational experts. As such, TBA and the terminals will be able to gain experience with the impact on the capabilities of the trainees, to ensure that this immersive 3D simulation technology will have a proven positive impact on the overall safety and efficiency at the workplace. 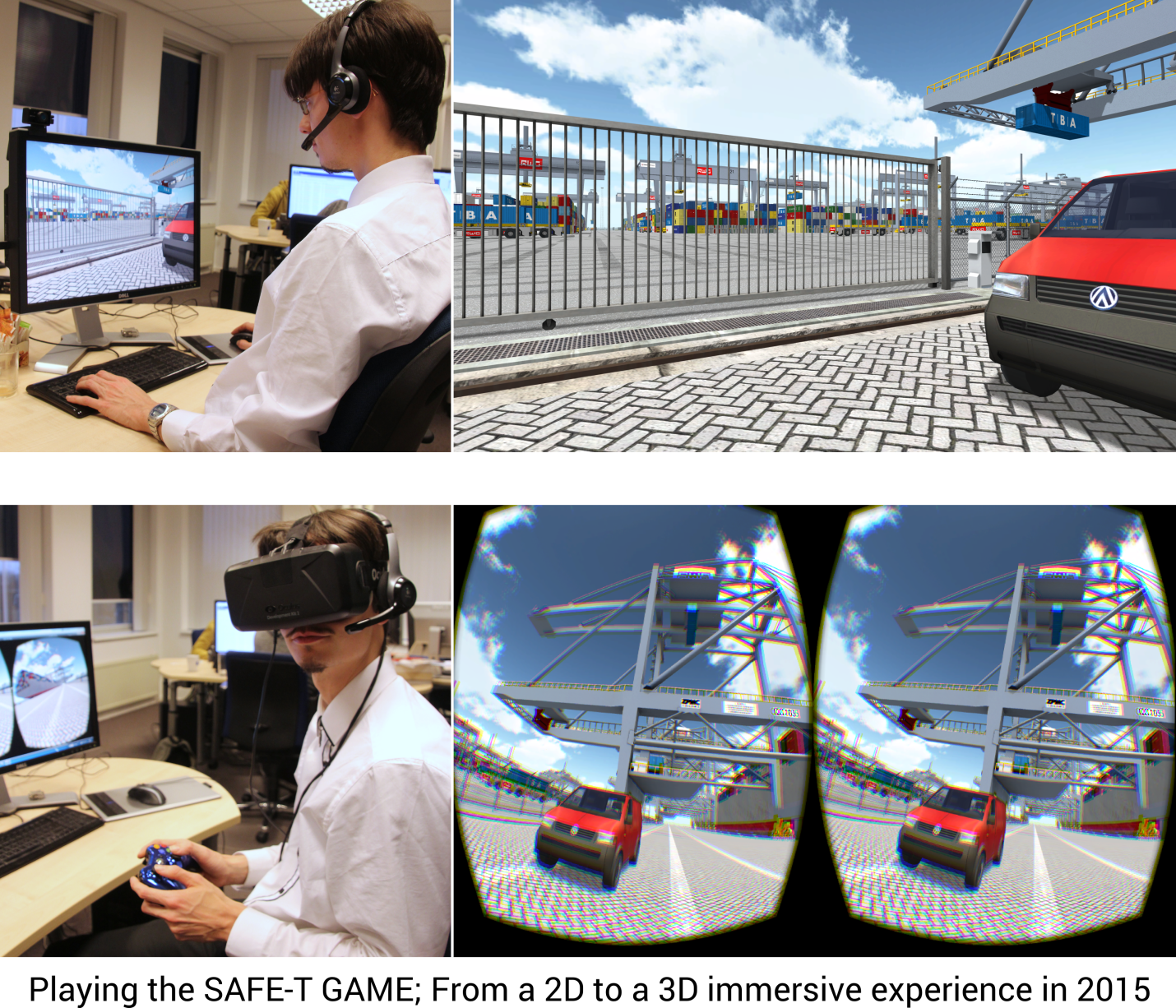