A pandemic pickle for the TBA Triathlon Team

The World Championship Long Distance Triathlon is still bound to take place on 12th September in Almere and the TBA Triathlon team is therefore still committed to increase their (mental and) physical performance to win this competition. Unfortunately, halfway March the circumstances concerning the COVID19 outbreak have led to strict measures in the Netherlands. With the current restrictions in place, the team has resolved to creative means to stay on track with their training schedule, to manage their private life and to work from home.

I’ve always liked mottos like “You only need to train if you lack talent” and “Visualisation is the best preparation”: Golden rules to maximise result, while minimising input. Some people call that being lazy. I call it being efficient. 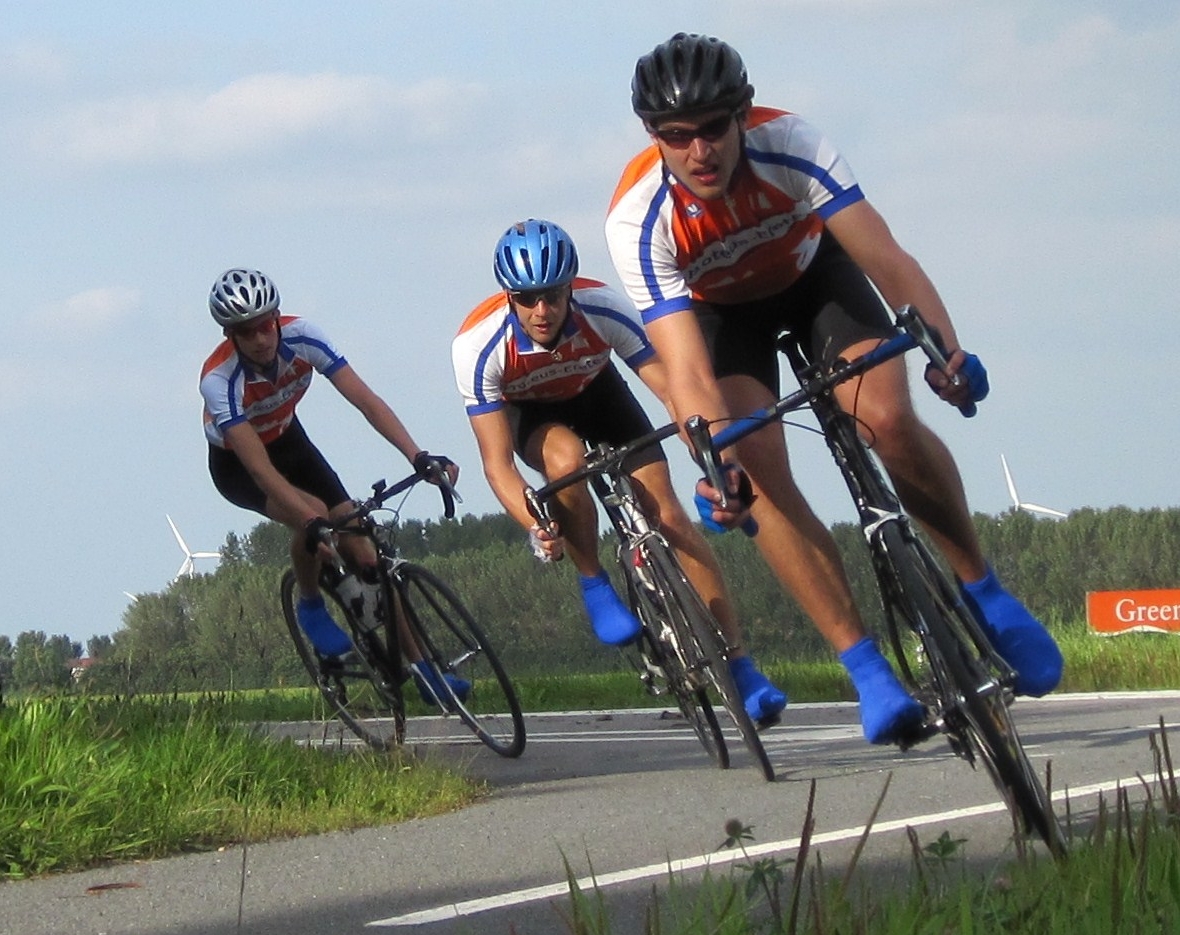 For this challenge however, it was clear that it would be unavoidable to do some actual training... OK, maybe even a lot of training. With exactly 300 days left, I therefore set as a goal to ride at least 300 hours and over 10.000 km before the event on September 12th. In winter though, it can be a bit of a struggle to accomplish those hours. Lack of daytime, low temperatures, precipitation and storms make it unattractive to go outside and to cycle. After around 4 months, I’ve only ridden around 4 hours outdoors. In fact, my bike has never even left the garage in 2020. So, what happened? Did I already give up? Did I get injured or ill?

No, none of the above. Instead of outdoors, I have been riding on an indoor trainer: a torturous machine on which you can mount your road bike, that will provide as much resistance as you can handle. Yes, this essentially is exactly as much fun as you imagine. And yes, although some people also refer to it as a “smart trainer”, it seems quite idiotic to use it voluntarily. To minimize the feeling of being nothing but a large sweat generator, there are some tricks to make indoor training more tolerable. For example, having a large ventilator to avoid inferno-like conditions is essential. Listening to music and podcast or watching movies helps to let time pass quicker. But the most important thing that motivated me to keep training is Zwift, an app that allows you to cycle in a virtual world. At any given time, there are thousands of other fellow sufferers around the world you can ride with, or even more fun, race against in cities like London, New York, Innsbruck or even up the Alpe d’Huez. 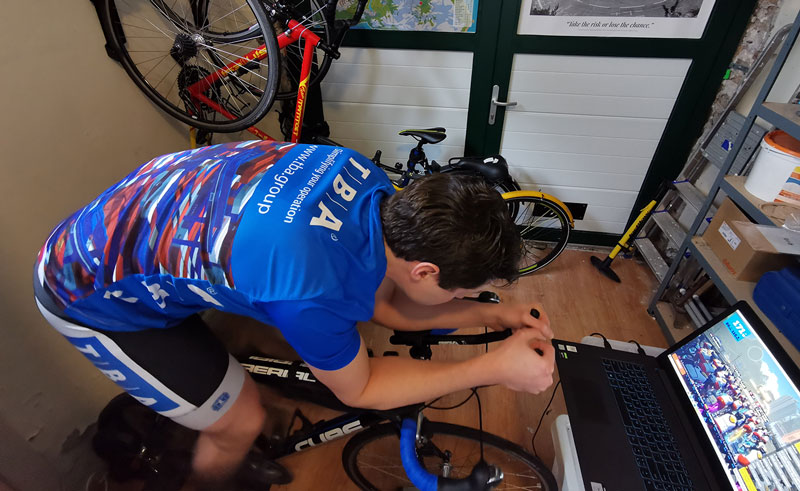 So that’s what I’ve been doing the past months. Packed with a couple of bidons, a laptop and headphones, I went into the garage (a.k.a. the Pain Cave), making a lot of virtual miles, keeping me on track to reach my training time and distance targets. To my surprise, I’m getting quite addicted. It has happened more than once, that when walking to the garage for a Zwift session, I noticed clear blue skies but still chose to enter the Pain Cave out of my own volition. I would preferably keep training like this until the triathlon in September. But unfortunately, summer is coming and the temperatures in the Pain cave will surely build up.

In February I combined the cycling training with ice-skating. During weekdays I skated twice (on Mondays and Wednesdays) and if there were no skating events (and if the weather was good), I did one or two cycling tours in the weekend. On Sundays I mostly cycle with my local cycling club and have already touched the 100 km distance a few times.

I had the same training schedule planned for March but in the beginning of March I had two work visits planned to TEE Sport terminal (PD Ports) in Middlesbrough, UK. I had to be creative to be able to exercise and stick to my training schedule, so I brought my running shoes with me. In this way I could compensate for the missed skating exercises during the visits.

Getting those winner's shoes

In the first week of March I participated in the first training camp of the year. For a week, I was cross country skiing in Norway, near the village Opdall, where I rented a small hut with my girlfriend (after this holiday to be referred to as fiancée). After more than 100km on the loipe, the foundation for the increased training intensity of the spring was laid. Skiing is a great way to train a lot of muscles at the same time which is important for triathlon. Starting your training period with more strength elements is advantageous as it will help you deal with longer endurance training and makes you more injury proof.

After a bit of recovery from the skiing trip, I got back on track with the running and swimming which I missed out the week before. The recover was well needed because I could still feel my muscles being a bit sore. However, at the end of the week I had a rowing match planned where I had to compete. Although I was not 100% fit, it went OK. This race was meant to be my final preparation for the famous Dutch spring rowing classics “Heineken Roeivierkamp” and “Head of the River”. Sadly, yet understandably, those events were cancelled due to Corona.

In mid-March I got to watch Manasse win all the internal competition on Strava on spending the most time in either cycling, running or swimming. That inspired me to give it my all. The aim was to train about 10 hours. Due to Corona, all my other rowing races were cancelled too. That was unfortunate as I had prepared all winter. On the bright side, I now had more time to go cycling (easier exercise with low effort if you cycle slowly)!

By the third week of March, we had started working from home. Working from home office required more effort for me to stay focused, but it also gave me the opportunity to be a bit more flexible in my schedule. With the weather being unusually great, I was able to cycle in the late afternoon while enjoying the sun. We were advised by the Triathlon Federation and Runner’s World not to do very heavy training to make sure your immune system is not compromised. Easy pace and training alone are not uncommon for triathletes, so the impact on my training is not too big. As an athlete we have the advantage of having a good immune system (hopefully) keeping the virus away or the impact minimal. Let’s hope things get better in a few weeks’ time!

For a good couple of weeks, I trained 5 to 6 times a week; swimming, running and ice skating combined. When “Zwemanalyse” – an organisation providing swim clinics under expert supervision and training techniques including video analysis - announced a last-minute training program in Rotterdam, I was able to get even better training.

I joined a group of two swimmers in the first session and we were coached by an instructor, who had been active in triathlon sports since the late 80s (that’s over 30 years of experience!). The focus of this 45-minute training was mostly on technique and less on endurance. It was a useful session, though it did confirm my weaknesses in swimming: my left and my right leg! The coach ensured me that I can overcome this hurdle, as he already noticed some progress throughout the training.

But then, Corona happened… Since the 13th of March, all organised activities have been cancelled. Outdoor or open water swimming is an option but with water temperatures still being at around 8°C, the difference to a swimming pool (a nice 25°C) is quite stark. The current circumstances are quite challenging: balancing private life, training and work. With two little boys running around, my wife and I are working and babysitting relay style. This leaves hardly any time to do indoor training activities or exercises. Hopefully, this will settle in the coming days/weeks.

In November 2019, a brave team of colleagues at the Dutch branch office of TBA Group took up the challenge from a rival team from another company and signed up for the World Championship Triathlon 2020. Our rival team has won the European championship long-distance triathlon for relay teams in 2019. The total time to beat on 12 September 2020 is an impressive 9 hours and 1 second.